I don’t always create resolutions or “find my word” when the new year comes around. Some years I’ll feel drawn toward a specific theme or prayer but it’s not something I’m particularly diligent about. Especially this year — in the midst of baby prep and my toddler’s third birthday happening right around my due date — I’ve got a lot on my mind and lists of to do’s written e.v.e.r.y.w.h.e.r.e., so the new year came and went without much of a signal on my radar.

The funny thing is, I didn’t set out to find my theme for the year, but I’m pretty certain it found me.

When I think back, it actually began pursuing me at the last bit of 2016. I’m currently expecting baby #2 and things are altogether different this go-around. Nothing major, so please don’t hear me complaining, just different.

From the beginning of my pregnancy, I kept feeling like the Lord was asking me to surrender myself to this pregnancy. Now, let’s be real a second and acknowledge that surrender is an inherent part of pregnancy – we give over our actual bodies for nearly a year’s time, so there’s that. But this calling was deeper; more toward a yielding in my spirit rather than just my physical body.

Even from the start, this pregnancy has been much more draining and taxing on me than my first ever was – physically, emotionally, mentally, spiritually.

At 35 weeks along, my doctor began my check-up with me laying flat on my back and her hands pressing into my belly feeling for my little boy’s position. She thought out loud, “where is his head??” as she searched and pressed.  I had been taking some peeks of him at work (I’m a sonographer), so I knew he had been breech for at least the past few weeks.

I hadn’t been concerned about it. Like, at all.
Until that moment.

Having a breech baby wasn’t something I had ever considered or expected, and I had no idea how much it affected, from a medical standpoint. My doctor briefly discussed some options if he stayed in that position, and none of them sounded especially appealing to me. A couple of them even scared me, if I’m being honest.

With this news, I began to pray that he would turn, along with some of our friends and family. A coworker even said a prayer with me right in the middle of the hospital cafe one day. I also went to see a chiropractor who specializes in Webster’s technique – a way to open up the mom’s pelvis hopefully enough for the baby to switch positions.

After all of that, I knew I needed to accept the fact that if this baby stayed breech, there was a reason for it. A plan. A purpose. And I would just have to get over my personal preferences and fears.

I would like to tell you that I had complete trust and zero anxiety about the outcome from that point forward. But that would be a total lie.

As my next OB appointment crept closer, I started to notice my stress level rising. Questions swirled in my head, fear of the unknown settled in my heart, and lots of opinions began flying my way. I was feeling for his head all throughout the day, and I had been researching natural ways to help the baby turn. Did you know there are entire websites devoted to “flipping techniques”? It was all becoming too much.

I reminded myself that I had a healthy baby inside of me – something so many long for – and however he needed to be brought earthside would be just fine.

My prayer changed from please, Lord, let this baby turn, to me asking Him for a surrendered spirit again. 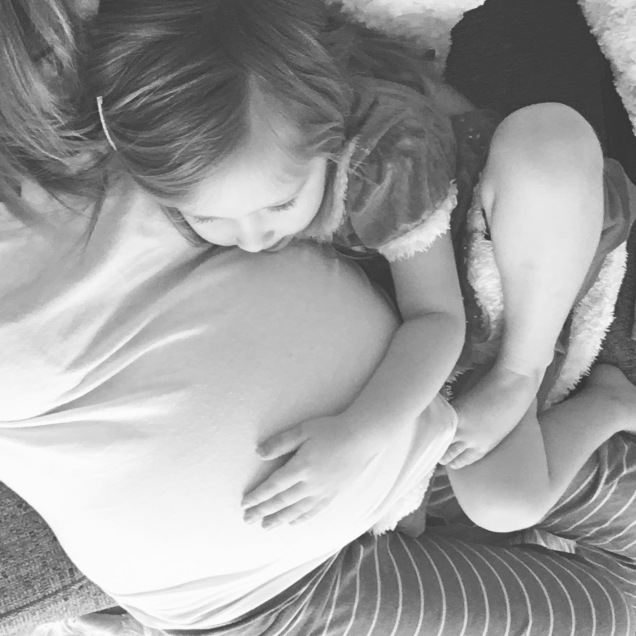 When I signed in at the doctor’s office for my 36 week check-up, I was still convinced he was breech (although I purposely hadn’t felt of him to confirm that), and I was becoming resolved to the fact that he would likely stay that way.

I came prepared with a list of questions for my OB regarding external cephalic versions, c-sections, risks and statistics – except these questions weren’t coming from a place of fear so much as they were to help me mentally prepare. I was ready to start firing them off when my doctor basically told me to hold my horses and let her check his position first.

Oh, right. That is actually a brilliant idea.

I laid back on the table and she began to feel around my belly. First up high, she said slowly, “I think that’s a butt…..,” and then feeling down lower in my pelvis, “….and pretty sure that’s a head.” My mouth dropped open.

What? Had he really turned?

I was positive he was still breech. So sure.

But no, an ultrasound confirmed that I was so wrong, and I’ve probably never been happier to be wrong.

I did a happy dance with my doctor, tucked away my list of questions I’d prepared, and as I stepped onto that creaky old elevator down to the parking lot, I felt lighter. I just kept thanking the Lord for this sweet change, this sweet unexpected answer to prayer.

My Father didn’t have to do that. But he did. (And let me just say, even if he hadn’t, he would still be good and faithful.)

Of course, this doesn’t guarantee anything. This baby could shock us all by turning back around, or my labor could still end in a c-section due to a variety of reasons. But we have a shot at a natural delivery, and that was my hope all along.

So, surrender. Here we are again, old friend.

I think it’s important that you know this surrender I’m talking about wasn’t perfect. It wasn’t quick or painless, and it wasn’t seamless. Much like motherhood, I do not have this completely figured out. (Um, not even close.) It’s a process. Even as I write this, I’m 38 weeks pregnant and I’m having to surrender my ideal timeline, because quite honestly, I want this baby out. Like, yesterday. I’m slowly and hesitantly handing over my questions, worries, anxiety, and stress to the Lord – one piece at a time. And many times, out of fear or habit or who knows what else, I still find myself reaching back for a piece I had already given over. (Feeling very grateful for a patient Father). The decision to surrender is just the first step in a long walk of following through and letting go. And then letting go again. And again.

I’ve seen such clear evidence that the Lord is using this to draw me in closer to Him, however small it might actually be in the grand scheme of things. Because, no doubt, there are much bigger things happening in other people’s worlds than upside-down babies or pregnancy timelines. But I’m appreciative that the Lord is faithful to use what’s relevant to us – right now – to bring us close, test us, and teach us.

Maybe your “right now” is something completely different. Maybe it seems too big and scary or too small and insignificant to submit to Him. But I promise, He can use it. And you know what?  You can surrender scared. In fact, that’s kind of the point. It gives our trust room to grow and mature.

Our family pastor at church often says it like this in prayer, “Lord, we agree with you for the plans you have.” And I think that’s really what it comes down to: acknowledging that His plans are greater and that we want to be part of the story, not in opposition to it.

So, my answer is yes, Lord. I agree with you for the plans you have  – for me, this baby, and our story.

Tell me: what are you being called to surrender to right now? Or what is your word/theme for 2017?

Hi, I'm Shanna! This is where I share the honest chronicles of a grateful wife + mom of 3 beautiful little people. I believe in pursuing the kind of radiant life we've been called to - one that reflects God's glory.

All photos and content are property of shannaleighwrites.com; use only with permission. Professional photos on this site are (c) D Crowe Photography.
Loading Comments...