Confession: I am not a “hostess” type.

The more people who RSVP with a “yes” the more I want to go hide in a corner until it’s over, no matter what type of event I’m planning. I cheer when people say they can’t make it.

During the planning of my daughter’s 2nd birthday party, my philosophy was “it doesn’t have to be fancy!”

Y’all. This is a two year old’s party. She will relive it through photos one day, but she will not remember it. I tend to let myself get overwhelmed with the details of events rather than focusing on the ultimate purpose, and I was determined not to let that happen. At the end of the day, I just wanted Aven to have a good time with all the people she loves.

{ Hey look! This was my own Minnie party, back in the day! Check out my mom’s cake decorating skills. Impressive! She definitely IS the hostess type. }

I started drafting this post the day after the party when we were still in recovery mode, because I know there are lots of people like me who feel that party planning is out of their comfort zone. But even for us non-hostess types, you can pull off a great party and have fun while planning it – I promise!

Here are some shots of the party and a list of things I found to be super helpful during the planning process. 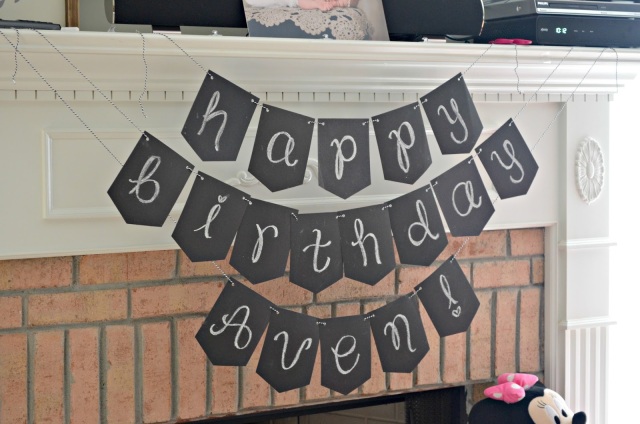 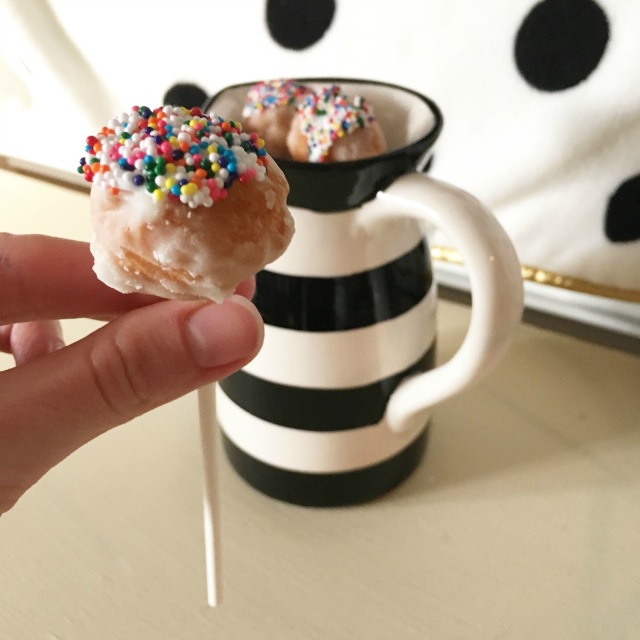 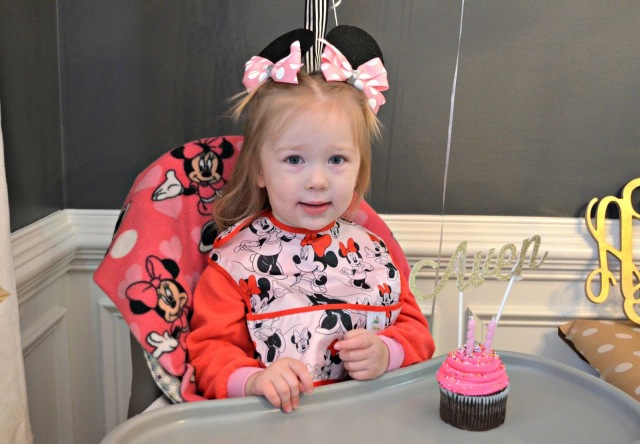 (her ears are actually pigtail clips from this Etsy shop) 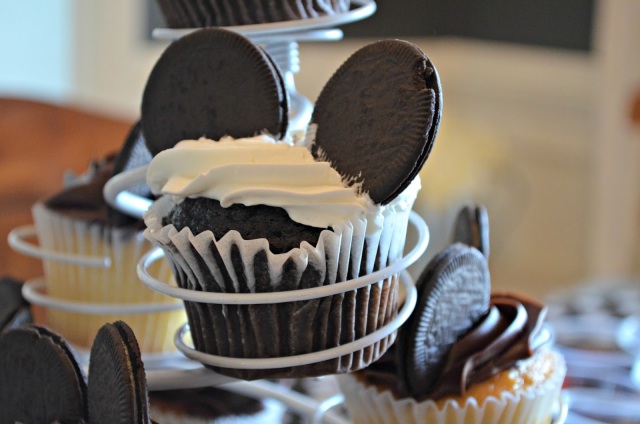 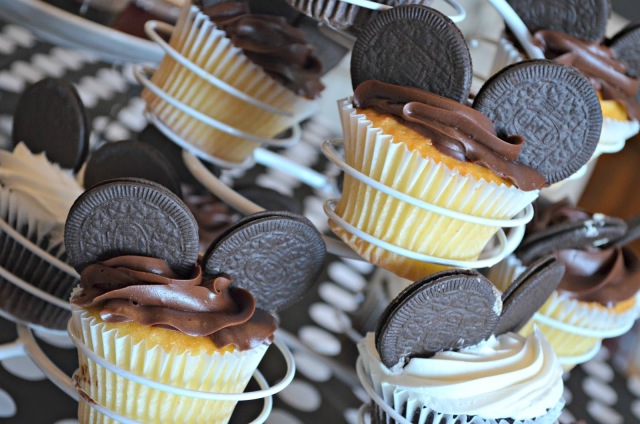 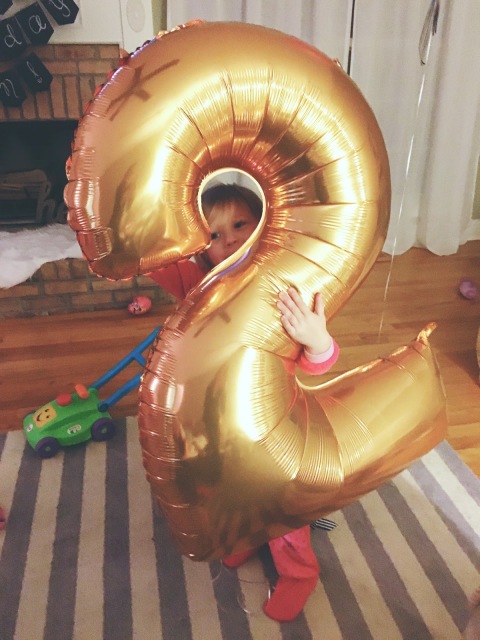 keep it simple. here’s how:

1. stick with a narrow theme and color scheme.
Because it’s her absolute favorite, we originally chose a Mickey Mouse Clubhouse theme, which would include a whole cast of characters. But since a ton of party planning is incorporating the colors of your chosen theme, and I wasn’t loving the use of so many bold primary colors for a little girl’s birthday party. I changed it up to a simpler theme of Minnie Mouse only, and stuck with the colors black+white, gold, and pale pink. SO glad I made this change. It really made it so much easier. If possible, stick to neutrals and one or two pops of color. (Also – buy paper products and utensils in neutral colors so you can reuse the excess later).

So, instead of a bunch of balloons, I used only FOUR. Yes – FOUR. I had one giant 30″ pink balloon, one huge number “2” Mylar balloon, and then two regular pink balloons for our mailbox. (balloons and paper straws purchased from this Etsy shop)

I also happened to find (really, it was fate) a black and white polka dot blanket with Minnie’s silhouette on it in the kid’s bedding section at Target. It couldn’t have been more perfect for the party and it became the primary inspiration for the rest of the decor. We used it as a focal point and backdrop on the day of the party. Bonus….we get to use it after the party!

3. party basics: banners + signs.
There’s a reason why party banners show up at every party: they’re cute AND easy! I strung a three tiered one on the fireplace mantle. It was black so I just wrote “happy birthday Aven” with chalk and strung it with black and white baker’s twine. I traced out the word “TWO” on glitter scrapbook paper and then strung that on the Minnie blanket backdrop. DONE. (I meant to move the “TWO” banner to the front of the high chair as decoration when we did her cupcake and candles, but I forgot. Anytime decor can pull double duty – go for it!)

I also purchased a chalkboard easel (something I wanted anyway and will for sure use again) and placed it outside by the front door as a welcome sign.

4. favors that function as a party element.
I bought a set of 12 Mickey and Minnie ears and placed them by the front door with a sign that said “We’ve got Ears, say Cheers!” They doubled as both decor and party favors for the kiddos. Another idea I love is to use food as favors – some extra special little snack you’ve put together and pre-packaged.

5. food: pick a theme.
We decided to do a morning (10am) pajama party, so the food was a no-brainer. My awesome husband made Minnie-shaped pancakes (!), and we did other breakfast foods as well. Fruit, pigs in a blanket, hashbrown casserole, monkey bread – those types of things.

Also – let your food decorate for you. You can put your cupcakes in a pretty stand and make it the centerpiece on the table.

6. use decor you already own.
I raided Aven’s nursery, my kitchen, and my box of party supplies for accent pieces that matched the party. I also borrowed several things from generous family members, like kid tables (which we covered in polka dot craft paper), platters, and trays.

7.  Pinterest is your party-planning friend.
Chances are, your party theme has been done, documented, and Pinterest-ed, so you can borrow other people’s creative ideas when you come up short on your own. I even printed coloring sheets off a link I found on Pinterest, so the kids would have a little activity to occupy themselves with.

8. some things just don’t matter – don’t waste time or brain power on them.
I am not the girl who’s going to bake a birthday cake. Just, no. Instead, I ordered Publix cupcakes and we stuck Oreo Thins in them as Minnie ears. Done. Work within your wheelhouse! Or have friends and family help you. You don’t have to do it all.


So, which side are you on? Does party planning make you giddy or give you an anxiety attack? I’d love to hear any other tips you guys have!

Hi, I'm Shanna! A Believer sharing the honest chronicles of a grateful wife + mom of 3 beautiful little people. I hope you find this to be a soft place to land, where together we search out the Glory and Wonder of motherhood that's right here in front of us.

All photos and content are property of shannaleighwrites.com; use only with permission. Professional photos on this site are (c) D Crowe Photography.